How do you measure noise levels?

Noise describes any unwanted sound that we hear. Frequent exposure to noise can have serious long-term effects on a person's hearing, with the HSE estimating that 14,000 workers suffered from work-related hearing problems, such as deafness or tinnitus, between 2018/19 and 2020/21. It can also contribute to other health conditions such as psychological problems, trauma, depression, irritation, high blood pressure and cardiac arrest.

The problems caused by exposure to noise are permanent and usually develop gradually, which can make them difficult to identify early. For this reason, it is essential that employers take steps to measure the noise levels in a workplace and take any preventative measures required to reduce a person's exposure to noise.

In this article, we will look at how to measure noise levels, and the units used to measure it.

What is a decibel rating?

Some common sounds, and their decibel ratings, include:

We have also created an infographic that illustrates how the decibel scale works, and shows the decibel ratings for several common sounds: 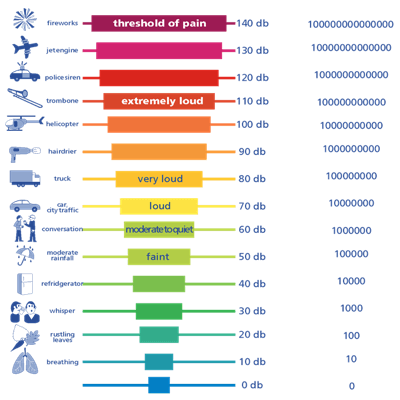 Some decibel ratings will also have a letter after them, such as dB(A) or db(C). The letter after the rating indicates the scale that is being used, with the A scale using a curve that attempts to mimic the way that the human ear hears sound.

There are three other scales used: B, C and D. The B scale is rarely used, the C scale is used for very high noise levels and the D scale is mainly used to measure aircraft engine noise.

What is the sones noise level rating?

The sone scale is another noise or sound rating scale that is primarily used by ventilation fan manufacturers to rate the sound levels of their products.

A sone is a measurement designed to represent the perceived loudness of a sound. It uses a linear scale, which means that 4 sones sounds four times louder than 1 sone.

Some example sounds, and their sone rating, are shown below:

How do you measure noise?

Understanding noise and being able to measure noise levels is very important because exposure to loud noise can damage a person's hearing and lead to permanent hearing loss. Employers must also measure noise to ensure that they are complying with health and safety regulations, such as the Control of Noise at Work Regulations 2005, which outline several noise exposure limits. To find out more about these regulations, click here to view our article on managing noise exposure.

The best way to measure noise levels is to use a dedicated sound level meter, but there are also several sound meter apps that allow you to measure noise using Android or iOS devices, such as iPhones. We recommend using either the built-in Noise app for Apple Watch or Decibel X, an app available for iPhones and Android phones, which can be used to easily measure the sound level of your workplace.

68 dB is roughly the noise produced by a normal conversation, and is generally considered to be a safe noise level that a person can be exposed to without experiencing harm or hearing loss.

What noise level is considered a nuisance?

Everyone is different, and will have a different level of noise that they consider to be a nuisance.

However, the Control of Noise at Work Regulations 2005 set an exposure limit of 80 dB, and state that action must be taken to reduce exposure to noise above this level at work, such as providing employees with hearing protection and regular hearing tests. This is because hearing damage can occur when a person is exposed to a constant background noise of 80 - 90 dB.

What is a safe noise level?

While 68 dB is generally considered to be a safe noise level, because it is equivalent to the noise produced by a normal conversation, the Control of Noise at Work Regulations 2005 state that an employee can be exposed to a noise level of up to 80 dB per 8 hour work day.

What is the acceptable noise level in the workplace?

While noise levels below these values are considered to be acceptable, the best way to protect an employee's hearing is to reduce their exposure to noise as much as possible. To help with this, the HSE have produced several useful noise calculators that can be used to determine an employee's noise exposure, which can be downloaded from their website.

At Commodious, we offer a noise awareness course that explores what noise is, the damage it can cause, and how you can reduce your exposure to it. To find out more about this course, use the link below: 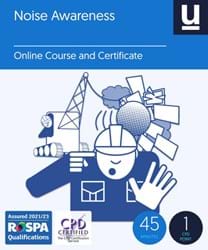