Injuries and illnesses at work are common, with Health and Safety Executive statistics showing that 693,000 people sustained an injury at work during 2019/20. Having first aiders in a workplace is essential in order to save lives and ensure that people get the emergency medical attention they need.

In this article, we will look at some common accidents and injuries, and provide some general information on how to approach dealing with them.

Be aware that the information provided in this article is general and should not be used in an emergency situation, and that first aid must only be delivered by someone who has undergone appropriate first aid training.

Upon finding a person who is injured, the first thing that should be done is to check that they are not in any immediate danger, and that it is safe to approach them. After this, an ambulance should be called (using 999) and basic first aid administered by someone who is trained in how to do so.

Anaphylaxis is a severe allergic reaction that a person can suffer from, usually as a result of an insect bite or after eating certain foods. These reactions are very dangerous as they can cause a person's tongue and throat to swell, making it difficult for them to breathe.

When a person is bleeding heavily, the priority of a first aider should be to call an ambulance and then stop the bleeding as soon as possible.

For wounds that have nothing embedded in them, this can be done by applying pressure to the wound with a clean dressing. Once the bleeding has stopped, the wound should be bandaged using a new clean dressing.

If someone burns or scalds themselves, the affected area should be placed under cool running water for around 20 minutes, or until the pain has stopped. If possible, any clothing or jewellery should be gently removed from the affected area while it is being cooled.

For burns that are large or deep, medical attention should be sought by calling 999 or using the NHS' 111 service.

Once cooled, cling film should be used to loosely cover the burn - never apply creams, lotions or sprays to a burn.

If someone is found drowning or struggling in water, the priority is to get them on land. If this requires entering the water, always check that it is safe to do so first.

Once the person is on land, call 999 for an ambulance and check that they are breathing. If they are, they should be placed in the recovery position with their head located lower than their body and, if they are not, they must be given 5 rescue breaths and administered with CPR.

If someone has experienced an electric shock, the power must be switched off at the mains to break contact between them and the electrical supply.

Once the power has been switched off, an ambulance must be called immediately if the person is not breathing. Otherwise, medical help should be sought to make sure that they are not suffering from any other injuries.

When someone sustains a fracture, first check that they are breathing and not bleeding. If they are, these things should be treated before the fracture.

If they are breathing and there is no bleeding, or the bleeding is under control, the fracture should be kept as still as possible to prevent further pain or injury. This should remain the case until the person has made it to hospital.

For less serious fractures, it may be appropriate to drive them to the nearest hospital but, for painful or serious fractures (such as a broken leg, back or spine), an ambulance must be called.

A heart attack is a serious life-threatening condition. This means that, if someone is having or has had a heart attack, 999 must be called as soon as possible.

Once the emergency services have been called, the person should be seated and kept as comfortable as possible. If available, they should be given a 300mg aspirin tablet to chew on slowly, because it can inhibit the growth of blood clots.

Poisoning is when a person is exposed to a substance that damages their health. If a person has been poisoned, an ambulance must be called and, when it arrives, it is important that the paramedics are made aware of what the poison is, if known.

The effects of poisoning can vary depending on the substance that a person has been exposed to, making it difficult to treat. However, no attempt should be made to make the person vomit and, if there is a need to start CPR, they should not be given rescue breaths in order to avoid poisoning someone else.

Shock is when a person does not have enough oxygenated blood, which prevents oxygen from reaching vital organs. This can make them appear pale, feel weak, sweat, and take rapid shallow breaths.

An ambulance must be called for anyone suffering from shock. They should also be laid down with their feet raised, and given a coat or blanket to keep them warm. Do not give someone with shock anything to eat or drink.

If someone has suffered from a stroke, it is important that they get emergency treatment as soon as possible in order to minimise the impact it has on their life. The signs of a stroke include:

If a person has any of these symptoms, an ambulance must be called immediately.

Before acting as a first aider, a person must complete an appropriate workplace first aid course. The two courses most commonly completed are:

Both of these courses provide learners with the first aid skills they need to act as a workplace first aider.

At Commodious, we offer a First Aid Awareness course. While this course does not allow someone to act as a first aider, it can be used to provide all staff with the information they need on how to act in a first aid emergency. For more information on this course, use the link below: 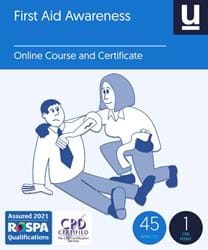