The different types of fire extinguisher and their uses

Fires are a frequent occurrence in the UK, and can have a devastating impact on a business. For this reason, it is essential that employers install adequate fire control measures and promote good fire safety practices among their staff in order to prevent them from taking place.

How many classes of fire are there?

Before looking at the different types of fire extinguisher, it is important to understand the classes of fire and what they mean.

There are six different classification of fire:

What is a Class A fire?

What is a Class B fire?

Class B fires involve flammable liquids, such as petrol, diesel, ethanol, paint, turpentine and paraffin. These liquids and their vapours can be ignited easily, and should be kept away from open flames as a result.

What is a Class C fire?

Class C fires involve flammable gases, such as propane, butane, methane and hydrogen. Flammable gases can be ignited very easily, and pose a serious fire and explosion risk in workplaces that make use of them, highlighting the importance of ensuring that they are stored correctly and away from open flames.

What is a Class D fire?

This type of fire is not common because of the very high temperatures metal requires to ignite. However, this high temperature also makes metal fires very dangerous if they do occur.

What is an electrical fire?

Electrical fires are caused by faults in electrical appliances, such as faulty wiring, frayed cables, short circuits and overloaded adapters. They are sometimes informally referred to as 'Class E' fires.

Electrical fires are not considered as their own class of fire because the electrical equipment ignites the surrounding materials and is not the thing that burns.

What is a Class F fire?

Class F fires involve cooking oil or fats that have been ignited. These fires occur most commonly in restaurants, and are often related to deep fat frying.

What are the different types of fire extinguisher?

It is important that the correct type of extinguisher is used to tackle a fire, otherwise they may end up making the situation worse. Thankfully, all fire extinguishers feature symbols to indicate the fires on which they are suitable for use, making it easy to avoid this mistake.

In contrast, water mist extinguishers feature a white band and can be used on class A and F fires, as well as electrical fires if they use non-conductive water.

Foam fire extinguishers are primarily water-based, and contain a foaming agent that smothers the fire. They have a cream band on top, and can be used to tackle class A and B fires.

Powder fire extinguishers (dry powder extinguishers) have a dark blue band on top, and will contain one of three different powders: ABC, M28 and L2.

Powder fire extinguishers are highly effective, and can be used on a range of fires. However, the powder can be dangerous to inhale and it can cause damage to certain items when used, such as carpets and electrical equipment, which may make these extinguishers unsuitable for certain environments.

Carbon dioxide (CO2) fire extinguishers feature a black band on top and have a large, distinctive conical hose. They work by displacing the oxygen in the air and suffocating the fire, and are suitable for use on class B and electrical fires.

Carbon dioxide fire extinguishers are great for workplaces where there is a high risk of an electrical fire taking place because they are not substance-based and cause little damage when used.

Wet chemical fire extinguishers have a yellow band on top, and usually feature a long hose. They work by cooling the oil or fat that is burning and creating a seal over its surface area to prevent it from re-igniting.

Wet chemical extinguishers are designed specifically to tackle class F fires, but can be used on class A fires too.

At Commodious we offer two fire safety training courses, one for all staff and another that is designed specifically for fire marshals. Use the links below to find out more information about these courses: 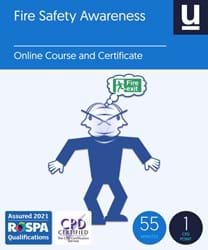 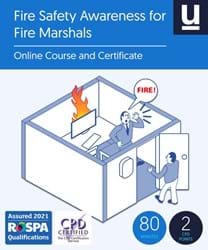