The UK is a very diverse place, with a wide range of cultures, backgrounds, perspectives and beliefs represented within it.

The importance of this diversity cannot be understated, and is essential for developing new ideas and helping people reach their full potential. For this reason, everyone should take steps to celebrate diversity and ensure that those around them, and in their working environment, are not treated unfairly.

In this article, we will look at some of the most frequently asked questions about equality and diversity, and explore its benefits and the legislation surrounding it in the UK.

What are equality and diversity?

Equality and diversity are distinct, but closely related, ideas:

Inclusion is another closely related idea, and is concerned with ensuring that everyone in a workplace feels valued and is able to fully participate and contribute at work.

What are the benefits of equality and diversity?

Having a diverse and inclusive workplace has a wide range of benefits:

The Equality Act 2010 is an Act of Parliament that came into force in order to prevent people from being discriminated against at work, or in wider society, as a result of certain personal characteristics.

The Equality Act replaced several previous pieces of employment law, such as the:

What are the protected characteristics?

The Equality Act sets out nine protected characteristics which cannot be used as grounds for discrimination or unfair treatment.

It is against the law to discriminate against a person based on their age. While this type of discrimination can affect people of all ages, it is a particular issue for those that are either very young or very old.

It is important to note that there are certain situations in which treating someone differently based on their age may be lawful. For example, most people need to be at least 24 before they can drive a bus, so a job advert for a bus driver that excludes people below this age would not be considered to be discriminatory.

The Equality Act prohibits discrimination against a person with a disability, which it considers as someone with ‘a physical or mental impairment’ that ‘has a substantial and long-term adverse effect on [their] ability to carry out normal day-to-day activities’. This definition encompasses a wide range of conditions, including non-visible disabilities such as brain injuries, learning difficulties and mental health conditions.

Employers are also prevented from asking about a person’s health or any disability before they make an offer of employment. Instead, they should ask whether a person requires any reasonable adjustments to be made during the interview stage to accommodate any conditions they have.

A person who is proposing to undergo, is undergoing or has undergone a process to change their gender is known as a transgender person.

Gender reassignment is a protected characteristic, which makes it illegal to discriminate against someone because they are transgender, or treat someone differently because of their gender identity.

This includes those who have transitioned to their affirmed gender but have not undergone any gender-affirming medical procedures.

It is important to note that this protection only applies to those in a legally recognised relationship, which excludes those who are single, divorced or engaged.

A person cannot be discriminated against because they are pregnant or have exercised any of their maternity rights, including the right to:

It is illegal to discriminate against a person because of their race, which the Equality Act defines as their: ‘colour, nationality, [and] ethnic or national origins’.

Under the Equality Act, people are protected from discrimination because of their religion or because of a belief that they hold. However, this protection is not universal, and only applies to those that:

People are also protected from experiencing discrimination if they do not follow a religion or hold a particular belief.

It is illegal to discriminate against a person because of their sex as defined on their birth certificate or gender recognition certificate.

While men do experience sex discrimination, it is a significantly greater issue for women. For example, women are currently more likely to be paid less than their male counterparts for the same type of work, or be passed over for a promotion.

Sexual orientation is a protected characteristic under the Equality Act, which states that it illegal to discriminate against those who are:

How do you promote equality and diversity?

There are a range of actions that employers can take to promote equality and diversity within the workplace. These include:

For more information on equality, diversity and inclusion, including how to promote them within a workplace, consider taking our Equality and Diversity training course: 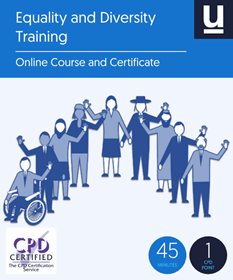