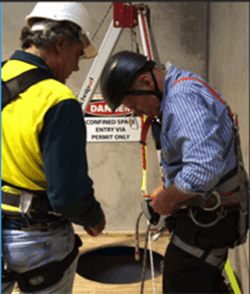 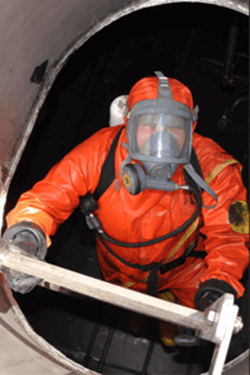 Let's start by defining what is a 'confined space'. This will also help answering some other questions, such as;

A confined space can be any space of an enclosed nature where there is a risk of death or serious injury from hazardous substances or dangerous conditions (e.g. lack of oxygen). 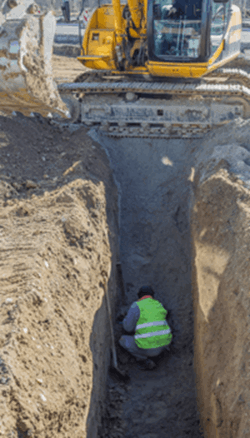 Some confined spaces are fairly easy to identify, e.g. enclosures with limited openings such as storage tanks, silos, enclosed drains, sewers and culverts. Others may be less obvious, but can be equally dangerous, for example unventilated or poorly ventilated rooms.

It is not possible to provide a comprehensive list of confined spaces. Some places may become confined spaces when work is carried out, for example during construction or during modification.

So the answer to the above questions is anything can be classed or become a confined space if it is substantially enclosed and after a risk assessment there is foreseeable risk associated with confined space hazards, such as fire, explosion, or others as defined in the confined spaces regulations 1997.

Sometimes it is easy to decide what is a confined space, if a site has issued a permit to work to enter a confined space and insisted upon adequate training and a method statement detailing a safe system of work to ensure health and safety, then whatever the situation it must be a confined space.

What are the hazards of working in a confined space?

There are many hazards associated with confined space working. Some of the conditions may already be present but some may arise from the work being carried out, e.g. dust from a portable grinder, welding fumes and fumes from solvents or adhesives and other hazardous substances.

Some other confined space hazards include:

A lack of oxygen -  this can occur when reactions occur in the confined space such as the formation of rust in steel tanks and the reaction of soil with the atmosphere in a trench.

Liquids and solids - which can suddenly fill the space for example a burst mains water pipe or free-flowing solids such as grain in a silo.

Fire and explosions - for example from flammable vapours, excess oxygen or high concentrations of dust e.g. in flour silos.

Hot conditions - leading to a dangerous increase in body temperature.

What is confined space training, how often is it required, does it expire?

An employer as a minimum MUST make employees aware of the dangers of working in a confined space and provide adequate training of the foreseeable risks and carry out a risk assessment that details a safe system of work. There are no regulations or legislation that states how often confined space training is required or expiry dates of any training or certificates.

All health and safety training should be refreshed when ever it is felt necessary. For further information on frequency of any training, see our article on asbestos awareness training but it equally applies to confined space training.

Make sure that the oxygen content in the confined space is not enriched. The maximum Oxygen content should be less than 23% and the minimum level greater than 19.5%. The normal atmosphere is composed approximately of 20.9% oxygen, 78.1% nitrogen and 1% argon with small amounts of various other gases. Reduction of oxygen in a confined space may be the result of either consumption or displacement.

How many air changes are required in a confined space? There is no legal or regulation on this, a common rule of thumb has always been 5 complete air exchanges per hour, but there are other guidelines that state 7 or 10 complete changes before work begins. The best way to determine safety for any substantially enclosed space is by having a professional perform a complete and accurate atmosphere evaluation with proper instrumentation to determine what their recommendation would be.

In practice, most people ventilate for as long as possible before entry, and then use a confined space gas monitor to make sure the atmosphere stays safe.