A Comprehensive Guide to Banksmen in the Workplace

A Comprehensive Guide to Banksmen in the Workplace

In this article, we will look at the roles and responsibilities of the banksman, the part they play in ensuring the health and safety of those on site, and the different hand signals and verbal communications they use.

What is a banksman?

What does a banksman do?

What is a slinger banksman job description?

What does a slinger banksman do?

What are the standard banksman hand signals?

What verbal code will a banksman use?

What are the risks associated with lifting operations?

What does a banksman do during lifting operations?

What are the risks associated with moving vehicles?

What does a banksman do during vehicle operations?

Can a banksman stop traffic?

What is a banksman?

Banksmen are operatives responsible for safely directing vehicle movement on or around a site. It is their job to ensure that any manoeuvres involving vehicles are carried out safely and do not endanger anybody or anything.

Banksmen, often referred to as traffic marshals or signallers, can be found in a range of different workplaces, including construction sites, docks, factories and warehouses.

What does a banksman do?

There are several things that a banksman must do to minimise the risks that a vehicle poses to personnel and equipment. These include:

What is a slinger banksman job description?

Under certain circumstances banksmen are required to aid lift operators, such as cranes. When banksmen assist a lift they are often referred to as signallers or slingers. Loads moved by cranes are often called sling loads hence the term slinger for the person helping the crane operator.

What does a slinger banksman do?

When acting as a slinger or signaller, they direct the lift operator using standard signals and/or verbal code.

It is important that the slinger or signaller has been trained to use the standard hand signals or agreed verbal code. So that the crane operator is in no doubt about how to safely operate the lift.

All lifts can be hazardous when health and safety standards are not upheld. However a slinger banksman is usually only required for larger operations, such as crane lifts.

Simple lifts such as unloading a Hiab or using a forklift do not usually require a slinger banksman.

It is important that banksmen can be easily identified in the workplace and, as a result, they must wear high-visibility clothing that is of a colour only used by banksmen. This could be a high-visibility jacket, helmet, sleeve or armband.

Some sites will also make use of the Safety Helmet Colours code, developed by Build UK, which specifies the colour of helmet that everyone on site should wear to ensure that they can be easily identified:

It is important to note that this standard is not a legal requirement, so anyone entering a site for the first time should take the time to find out what the banksman is wearing, and how they can distinguish between the different workers on site, to ensure their own safety.

What are the standard banksman hand signals?

There are a set of twelve standard hand signals that a banksman will use. They are designed to be precise, simple, expansive, and easy to make and understand.

These twelve signals can be split into three categories:

It is important to be aware that, when a banksman performs a gesture more quickly or slowly, it indicates that the action should be performed likewise.

What verbal code will a banksman use?

Alongside hand signals, a banksman may use verbal communication to direct a manoeuvre. If they do so, they will use a set of code words that include:

What are the risks associated with lifting operations?

When not carried out correctly, all lifting operations can be dangerous. For example:

As a result of this, a banksman may be needed to supervise and direct larger lifting operations, such as crane lifts.

What does a banksman do during lifting operations?

The Lifting Operations and Lifting Equipment Regulations 1998 (LOLER) state that:

“If the operator of lifting equipment cannot observe the full path of the load, either directly or by means of auxiliary devices, the employer should ensure that a responsible person has appropriate means of communication to guide the operator.

Measures should be taken to prevent the load striking anything or any person.”

According to LOLER, a banksman is needed when the lift operator cannot see the load during any part of the lift. They will be responsible for directing the operator using hand signals and/or verbal code to ensure that the load does not travel over anybody and does not come into contact with anything or anyone.

While not explicitly mentioned by LOLER, banksmen should also be used for any lifting operation in which assistance is required to ensure that it is carried out safely, not just those where the load cannot be fully observed.

What are the risks associated with moving vehicles?

Operations that involve the use of moving vehicles, such as loading and unloading operations, can be dangerous and pose several risks, including:

These risks are increased dramatically during vehicle reversing manoeuvres, with almost a quarter of all vehicle-related deaths caused by a reversing vehicle.

What does a banksman do during vehicle operations?

In order to avoid the risks and accidents associated with moving vehicles, banksmen are often deployed to safely control vehicle movement by designing and laying out the roadways for vehicles to travel on through a site. They may also personally direct vehicles when traffic is heavy in order to avoid excess queuing.

Usually, banksmen will implement a one-way traffic system that allows vehicles to safely flow through a site and minimises the need for pedestrian crossings to maintain safe segregation.

What are turning areas?

Turning areas are used to allow vehicles to safely turn around while driving forwards for as much time as possible. Ideally, a ‘banjo’ arrangement will be used, although ‘hammerhead’ and ‘stub’ arrangements may also be required.

Much like unavoidable reversals, any vehicles using a turning area must be directed by a banksman. During the operation, a banksman will:

What is a one-way system?

One-way systems are designed to help eliminate the need for vehicle reversals. They are sometimes referred to as drive-in/drive-out systems.

They usually work clockwise around a site as this is the direction most drivers would expect. 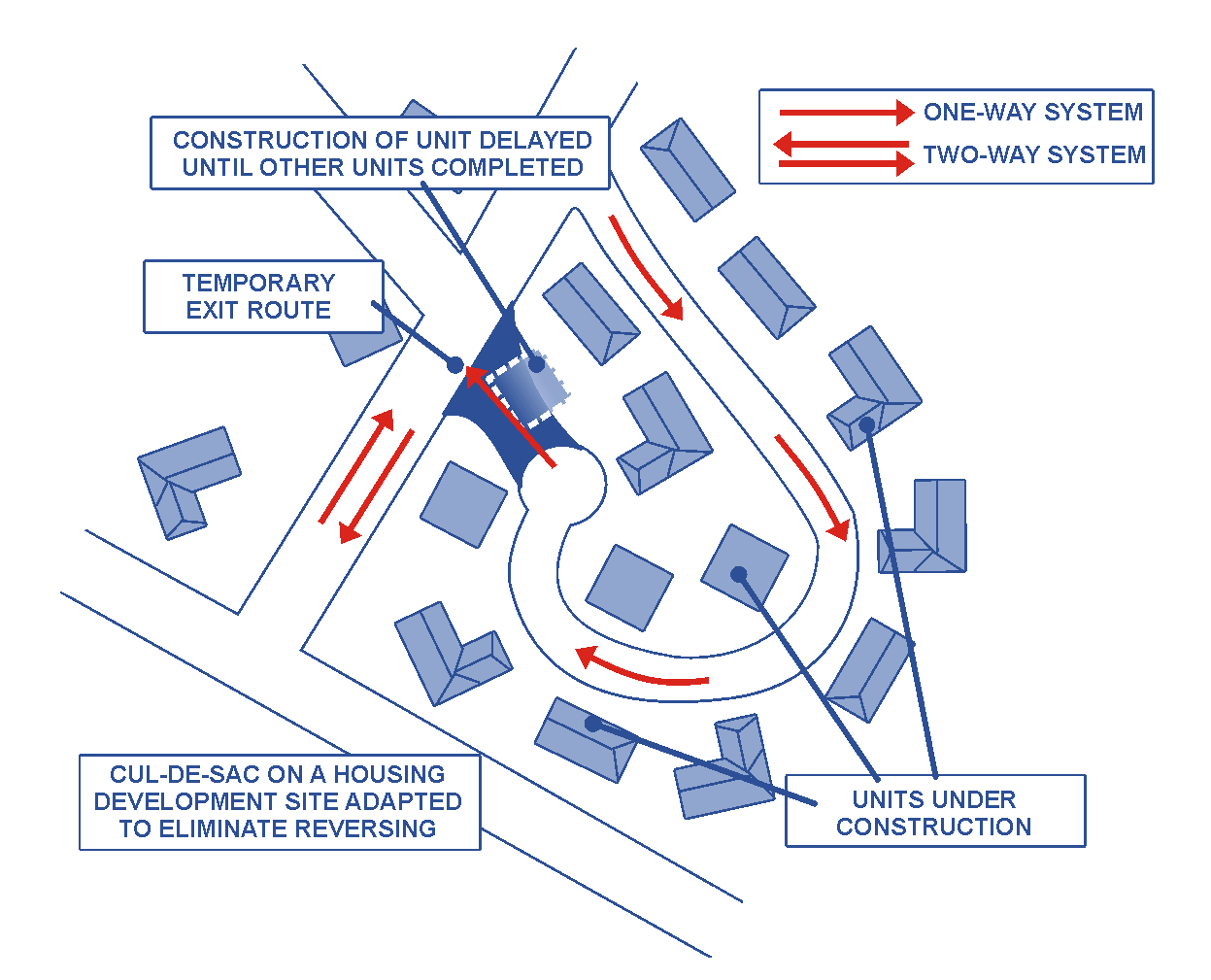 What are unavoidable reversals?

Vehicle reversals can be very dangerous and, as a result, should only be undertaken as a last resort.

While one-way systems help reduce the need for reversals, they often cannot eliminate them completely – especially so for loading and unloading operations.

If an unavoidable reversal needs to be carried out, a banksman will be required to safely direct the driver into position. 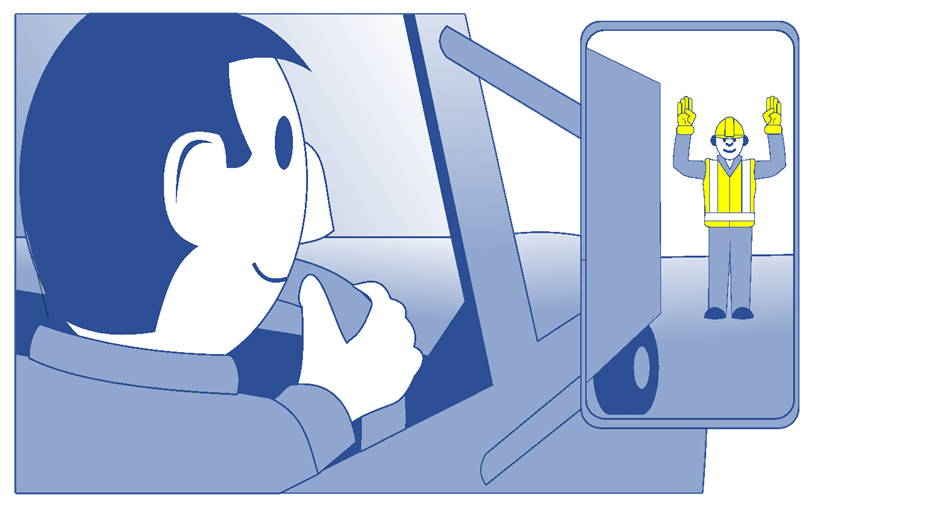 Can a banksman stop traffic?

However, in some police force areas (but not in Scotland) a Community Safety Accreditation Scheme (CSAS) (PDF)- Portable Document Format may be in operation. Under CSAS, other organisations or companies can direct traffic on a public highway. Check the area police force website for a list of approved organisations.

For more information on traffic marshalling on the public highway try the HSE website.

A vehicle banksman training course or just vehicle banksman course, when successfully completed, enables people to act as traffic marshals. This means they understand how to safely control vehicle movement on sites by designing and laying out the roadways for vehicles to travel on through a site.

A traffic marshal will endeavour to implement a one-way traffic system to facilitate the flow of a vehicle at work through the site and try to avoid pedestrian crossings to maintain safe segregation.

They may personally direct vehicles when traffic is heavy in order to avoid excess queuing. 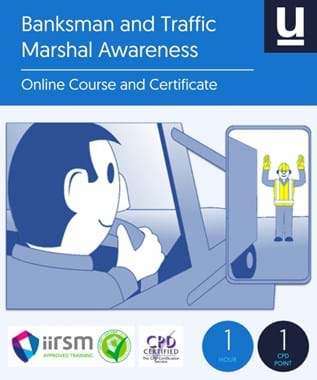