Can You Remove Asbestos Yourself?

Asbestos is a name for naturally occurring fibrous materials widely used in building work  during the 70s and 80s, before their adverse effects became known. While asbestos-containing materials are now banned in many countries, including the UK, they might be present in houses built before 2000.

This article explores asbestos removal, and can be used to help you decide what to do if you encounter it on your premises.

Is It Safe To Remove Asbestos Yourself?

Removing asbestos yourself is not safe. Any attempt to handle asbestos puts you and your family members at risk of developing lung cancer and other health problems.

Many people might consider removing asbestos themselves to avoid the expenses that come with hiring a professional, including the costs of the asbestos survey and the removal itself, especially because many types of insurance do not cover testing and other asbestos services. However, asbestos exposure can be life-threatening and leads to around 5,000 deaths in the UK each year, so removing it safely is essential, regardless of cost.

Asbestos can be found in various building materials, such as insulation boards, flooring, roof tiles, panelling and more. If you discover asbestos in your house, do not attempt to touch it in any way - asbestos poses the most risk when disturbed because the fibres are released into the air and might be inhaled. If you think asbestos in your house has been disturbed, do not clean it up with a vacuum cleaner as it can spread the fibres and increase the risk of inhalation of asbestos dust.

Instead, isolate the area and contact an Asbestos Abatement Contractor, who will ensure its safe removal and disposal without releasing particles into the air. You can also get in touch with your local authority and seek advice from an environmental health officer. If removal is not practical or necessary, a professional may advise that any asbestos-containing materials are left alone or secured, using a process known as sealing or encapsulation, to prevent future damage.

If you suspect your house might contain asbestos, but you have not identified it yet, you should read our article titled 'Asbestos: How To Identify, Test and Remove It', which will give you more in-depth advice on what to do.

Can Any Type of Asbestos Be Removed By Yourself?

Even though different types of asbestos minerals do not have the same level of toxicity, they are all a health hazard and should only be removed by a professional. These types are:

Some mineral resources might contain trace amounts of asbestos. While most products made of these minerals are harmless, it does not mean they cannot be contaminated.

All types of asbestos can cause lung cancer and other life-threatening diseases. Read our article titled 'Top 9 questions on asbestos, answered' to find out more information on the consequences of exposure to asbestos fibres.

Consider taking our Asbestos Awareness course for a better understanding of asbestos and the risk it carries: 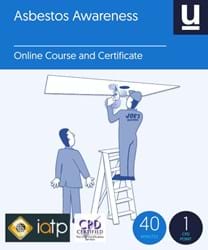